An integral part of the District’s mission is to be good stewards with our customers’ funds and to be accountable for how those funds are spent. Accountability is critical to our process. This is the reason our financial statements are available on Ohiocheckbook.com. In addition, we are providing information relating to our annual budgets as well as a link to the Ohio Auditor of State’s website where anyone may view our biannual audits conducted by an independent auditing firm. Finally, our customers have the right-to-know about significant contracts the District enters into with third parties.

Contract with City of Defiance to Purchase Bulk Water

Let us know if we missed something or if you have any questions. 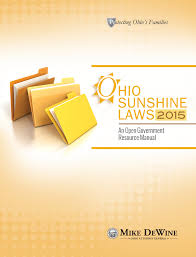 Government records in Ohio are public in nature unless identified as confidential pursuant to law. It is the policy of the Ayersville Water and Sewer District to adhere to the State of Ohio’s Public Records Act in accordance with the Ohio Revised Code.

The state’s public records law and open meetings law are known as “Ohio Sunshine Laws.” They comprise some of the most comprehensive open government laws in the nation, according to our state’s attorney general. The District follows these and the annual changes.

A “Public record” is any record that serves to document the organization, policies, functions, decisions, procedures and other activities of the District, and is determined by an “actual use” standard. The District follows the definition of public record contained in Ohio Revised Code Section 149.43(A) and the same exceptions outlined in that Section apply.

Although not required, a Public Records Request form is available for you to complete to help make the request process more efficient.